2018 was the year I dragged myself back into the habit of reading, aided by my girlfriend and a couple of close friends being or becoming allies in the fight against my high-sucrose internet media consumption habits. It’s good to be able to say 2019 was a continuation on the journey to becoming, again, an avid reader.

The following lists each book I completed in 2019, along with some comments on why I chose to read it and what I got out of it. The list is more or less in chronological order going down. The list is 16 books and doesn’t include half a dozen books that are 80-90% finished. They’ll have to show up in the 2020 retrospective.

To track my reading I use Goodreeds.com which I interact with mostly through a Command Line Interface (CLI) I wrote.

I had to eventually read this ‘Great American Novel’, given that I adore the author’s short stories and his “This is Water” college commencement speech. At times it’s a slog, and I hurt my enthusiasm by looking up the ending online, at page 500, but there’s so many bits of stunningly brilliant writing and cultural commentary that I think I’ll put all the needed effort read its 1000+ pages again.

Of Mice and Men - John Steinbeck

Books as good as this that can be read in a day are among my favourite things now. This was great. The idea of being men trapped by the circumstances of their time has stuck with me, most vividly in the poem line that lent the book its title.

Both George and Lennie had humble lives and dreams, appropriate to their time in Great Depression America, and yet a simple happiness was not afforded to them. It’s now a story providing to me a window into that part of history and a useful perspective on my own life aspirations.

The Long Tail: Why the Future of Business is Selling Less of More - Chris Anderson

If you’ve read enough of the blog posts that show up on the Hackernews front-page then much of what’s here will be pretty familiar. It’s good to go to the primary source material though, and see the original argumentation made when the conclusions of the book weren’t accepted by all as obviously true. I reviewed a product that I’m developing using the book’s ‘long-tail internet business framework’ and found that quite helpful. Looking at the web landscape today, I think that the ‘search and filter’ part of our long-tail internet world is still underdeveloped, with the biggest web businesses focused on being excellent at “democratizing production” (Force 1/3) and “democratizing distribution” (Force 2/3) and not so good at “connecting supply with demand” (Force 3/3) in a way that pushes consumers to explore the long-tail. 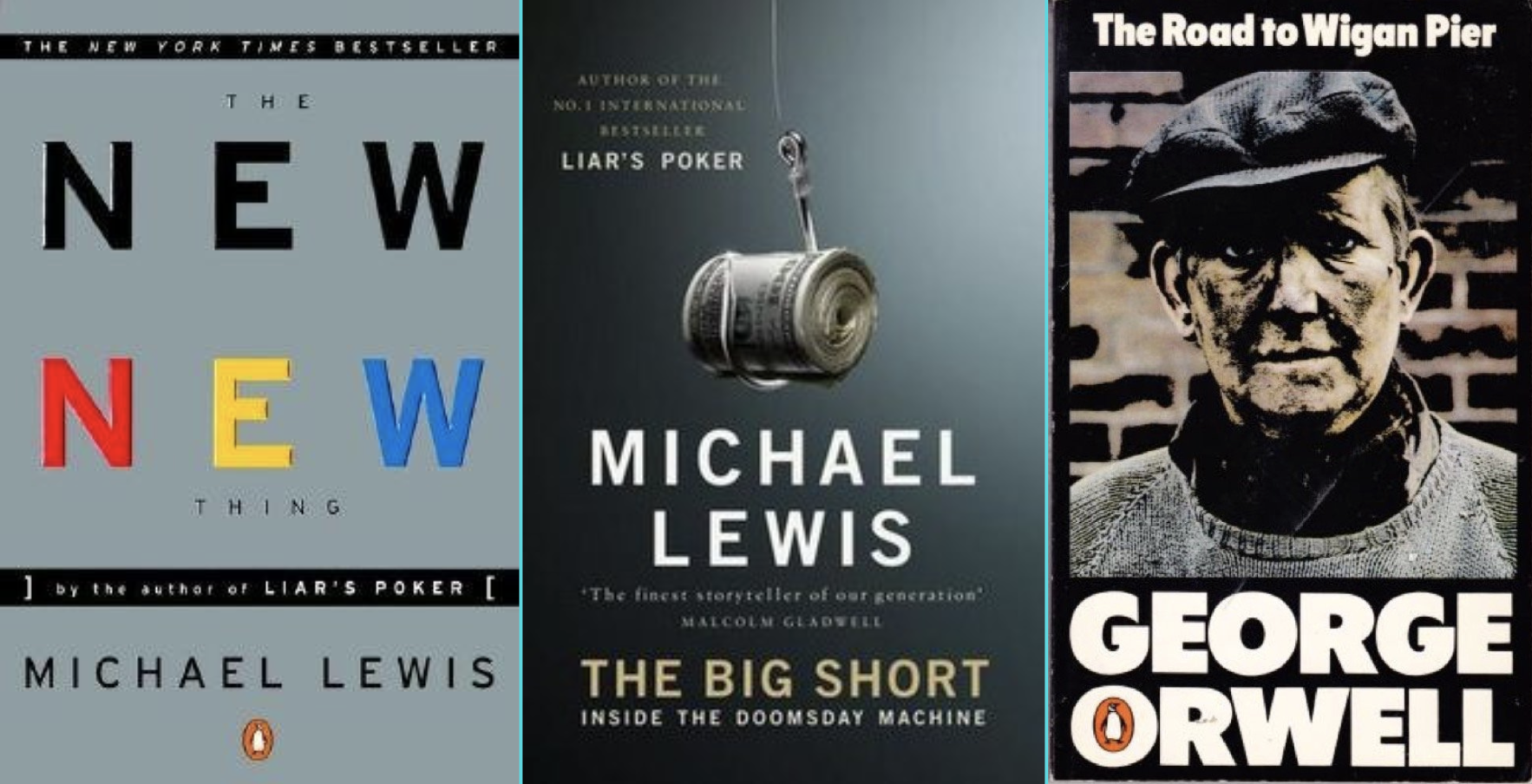 Picked this up because I wanted to learn more about the seeds of our current Silicon-Valley centric software world and it appeared on a couple of those “Best books about Technology” lists.

Michael Lewis is a super engaging writer and did a good job getting across the mentality of an early computer-age entrepreneur. The early description of the Silicon Valley computer revolution as “the greatest legal creation of wealth in history” has stuck with me too. Noting that there was almost certainly some dodgy shit involved and also that “legal” is often a low-bar to clear, it is true that computers are so fantastically useful that people didn’t have to engage in (say) awful imperialism to produce trillions in value.

The Big Short: Inside the Doomsday Machine - Michael Lewis

I’ve watched the movie 10-20 times, and decided to read the book after a close friend said it was 5/5. Like The New New Thing, it’s a joy to read and naturally contains much more meat than the movie. Will likely read it again and again to sear into my brain the disgusting levels of greed and moral hazard in the financial sector, and the subsequent failure of Neoliberal politics to realise justice in the aftermath of 2008.

Probably most impactful book of the list. Reading about the working class of early industrial North Britian really solidified to me the decency of Socialism. I liked how Orwell treated the miners with dignity in his description but didn’t shy away from describing the ugliness of their poverty. The second half has his more controversial views on Socialism and class, in which I found lots to grapple with, and disagree. The ending is also just awesome:

And the perhaps this misery of class-prejudice will fade away, and we of the sinking middle class – the private schoolmaster, the half-starved free-lance journalist, the colonel’s spinster daughter with £75 a year, the jobless Cambridge graduate, the ship’s office without a ship, the clerks, the civil servants, the commerical travellers, and the thrice-bankrupt drapers in the country towns – may sink without further struggles into the working class where we belong, and probably when we get there it will not be so dreadful as we feared, for, after all, we have nothing to lose but our aitches.

It’s over 80 years on and yet it seems to me we in the middle class face the exact same sinking problem and have the exact same class-prejudice still dividing any left coalition, earning costly election losses in Australia and the UK. The whole of this book felt like it was of evergreen relevance to today. What strength and credibility does this offer to Socialism’s critique, and unfortunately also to its continued impotence?

The weirdest read of the year. The author goes to further extremes than anyone else I’ve come across, but he doesn’t waste any of the ludicrous violence and depravity. I actually winced reading the first attack, on a homeless man (I’m not usually that much affected by violence in media), and it just got worse and worse and worse from there. The violence doesn’t ever become pointless though, maybe only a little tiring. I’d say the critique of the USA’s relationship with masculinity, materialism, and capitalism holds together all the way through. I’ll likely read Less Than Zero when I’ve got back my appetite for this guy’s writing.

Sorry to my friend that strongly recommended this to me over 10 years ago, I’ve only just read it and you were exactly right about how enjoyable it is. Halfway through chapter one I was hooked, and despite being full of ridiculous shit it never felt like Adams was writing silly and unpredictable things without making those things wrap something interesting and serious.

The past year or two I’ve been thinking a lot about building an educational tool, and wanted that tool founded on a solid theory of education. Before this book, my understanding of education has come either indirectly (in books, movies, etc) or directly through undertaking it. I had never read a book about education, by an education researcher.

This book impressed me, particularly in how the author makes use of research spanning multiple decades and also other recent-ish research which thoroughly debunks some core tenets of modern education styles in the western world. Hirsch is also thoroughly egalitarian, which mixes in nicely with my own values.

Reading it did feel a bit like an exercise in confirmation bias though, as there was basically nothing that challenged my pre-existing ideas about how education ought to be conducted. I’ll have to read another view on these things in 2020. 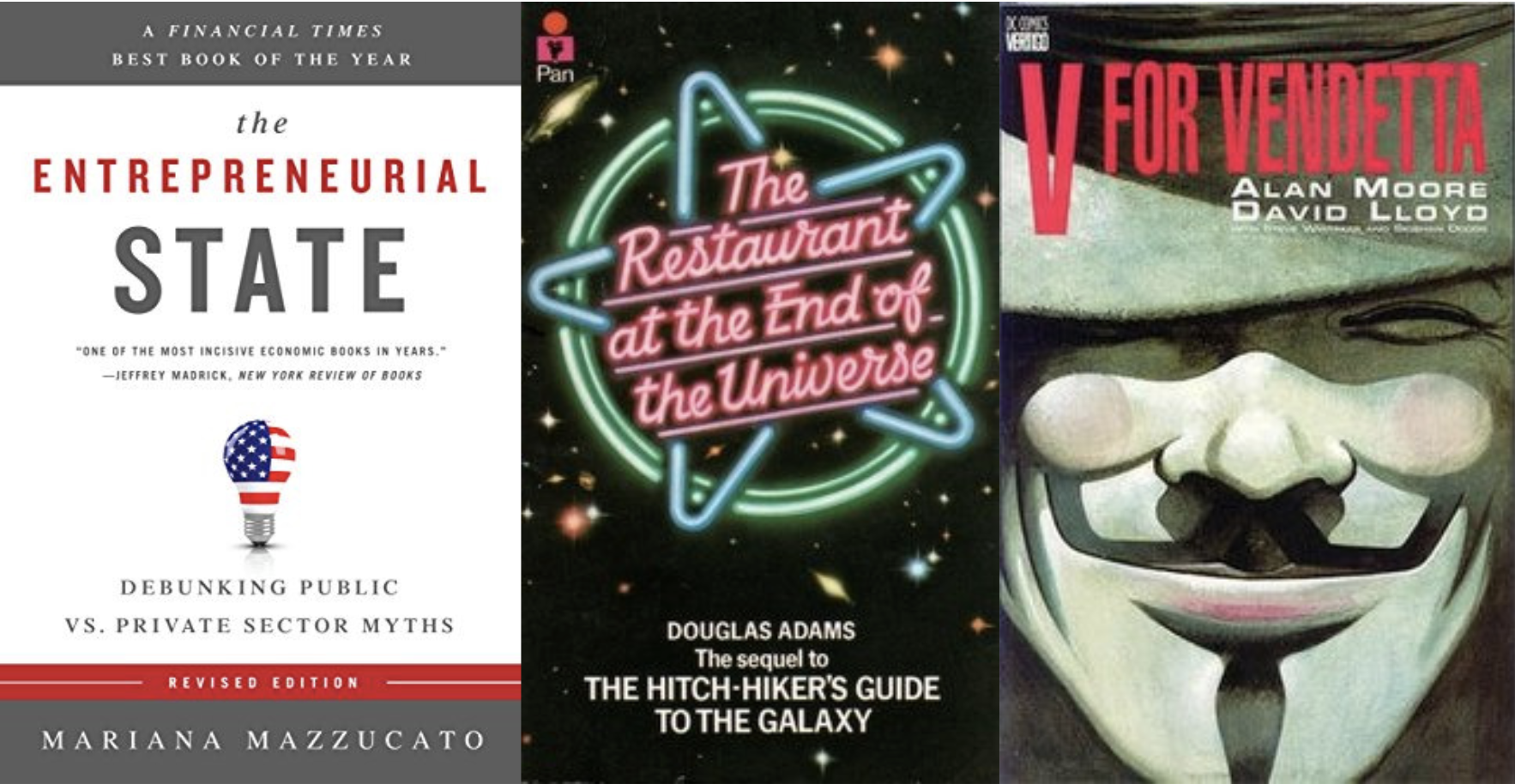 I don’t know how I picked this specific book, but I have been wanting to read an argument about Silicon Valley’s innovation, and first-world society’s innovation generally, that wasn’t the culturally dominant argument which is flagrantly pro-Capitalism. It’s got more of an academic flavour than a lot of other books here, and I did struggle through it at times, but it’s got a strong argument that I’ll read through again to gain a tighter grip on it’s details.

Even just committing to memory the names of each Government program that funded each critical technology in the IPhone would be a start.

The Restaurant at the End of the Universe (Hitchhiker’s Guide to the Galaxy, #2) - Douglas Adams

Loved the first, so quickly read the second. It’s just as good.

I’m about a third the way through the third, but after reading that much Adams in a short time I found myself reaching for something different.

I bought this after hearing Moore as a guest on the Chapo Trap House podcast and finding his ideas properly strange, then hearing a guest on the Ezra Klein Show effusively praise his work, then looking him up and seeing him named as amongst the greatest living English writers.

Though From Hell is apparently awesome, I chose V For Vendetta because I liked the movie and Fascism is topical these days.

I haven’t read a graphic novel since Maus: My Father Bleeds History, and I sometimes worried that I ‘wasn’t reading it right’. 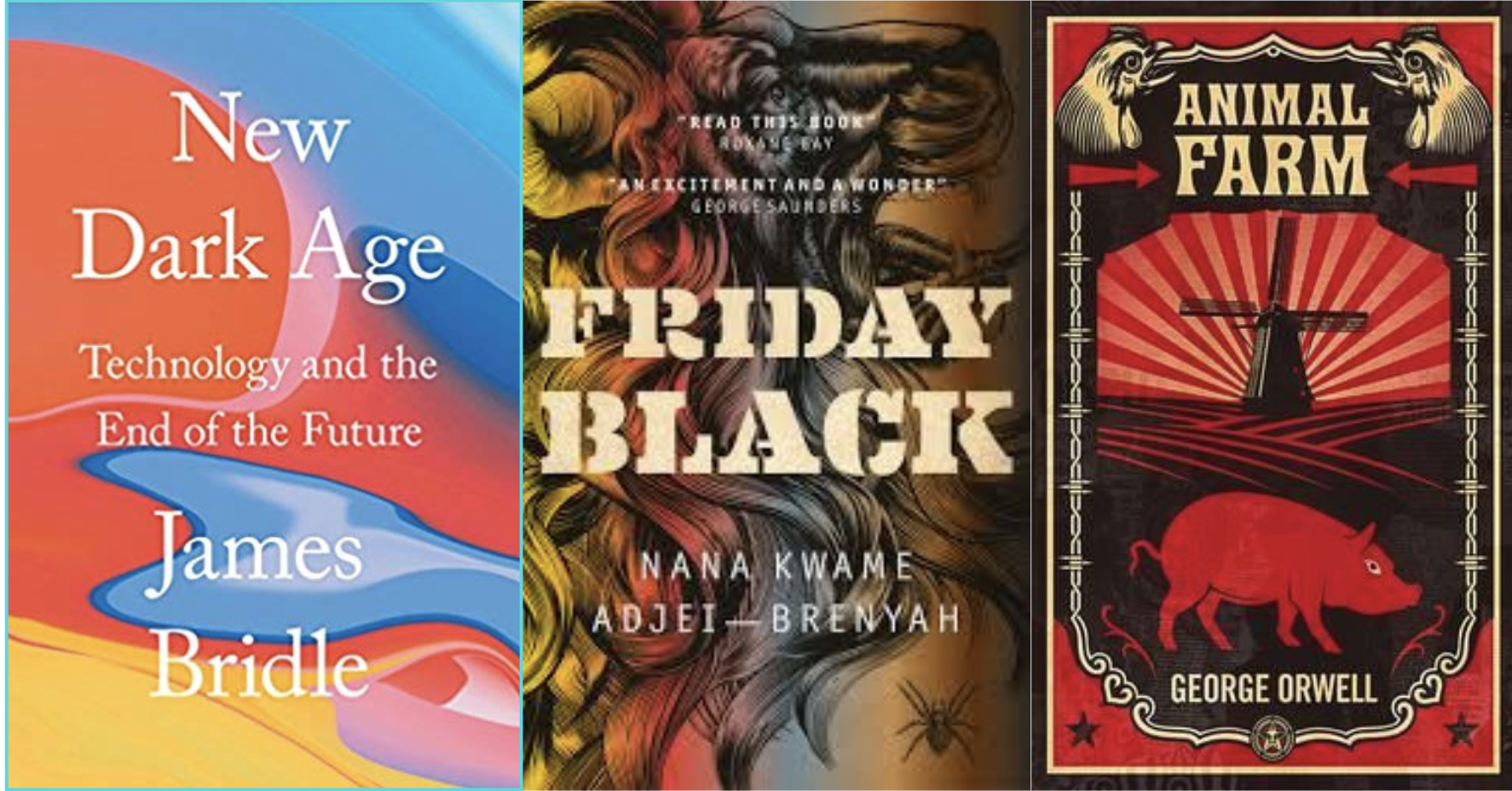 New Dark Age: Technology and the End of the Future - James Bridle

I count myself as amongst those increasingly skeptical that the tech industry is a generally good thing, and so James Bridle’s broad critique of our modern information age was right up my alley. This guy I think has a really good eye for emerging tech-native problems, but I was a bit disappointed with the book because it doesn’t provide a unified critique. It reads as a series of ‘look at this bad stuff’ articles that point consistently at an abuse of technology and also a misunderstanding of it (ala Technopoly), but without tying anything together such that the reader can feel ready to make use of Bridle’s information and heed his warnings.

This was recommended by someone at a Writer’s Festival event after I mentioned Chomsky in a comment, and I’d also seen it praised highly in a number of places. (like The New Yorker?) Overall I was disappointed with it. A couple of stories have a great concept and/or some clever and creative writing, but too many of the stories I just didn’t get at all. Either the point completely eluded me (eg. the abortion one) or I think I got the point but it was an underwhelming point so maybe it didn’t?

A friend offered to lend it, and I thought at 150 pages or so there’s really no excuse not to have read it. Even though I have gathered much of the content over time from all the people that talk about it or borrow from it, it was still enjoyable. I’d completely forgotten the pigs start walking so that aspect was great when I got to it. 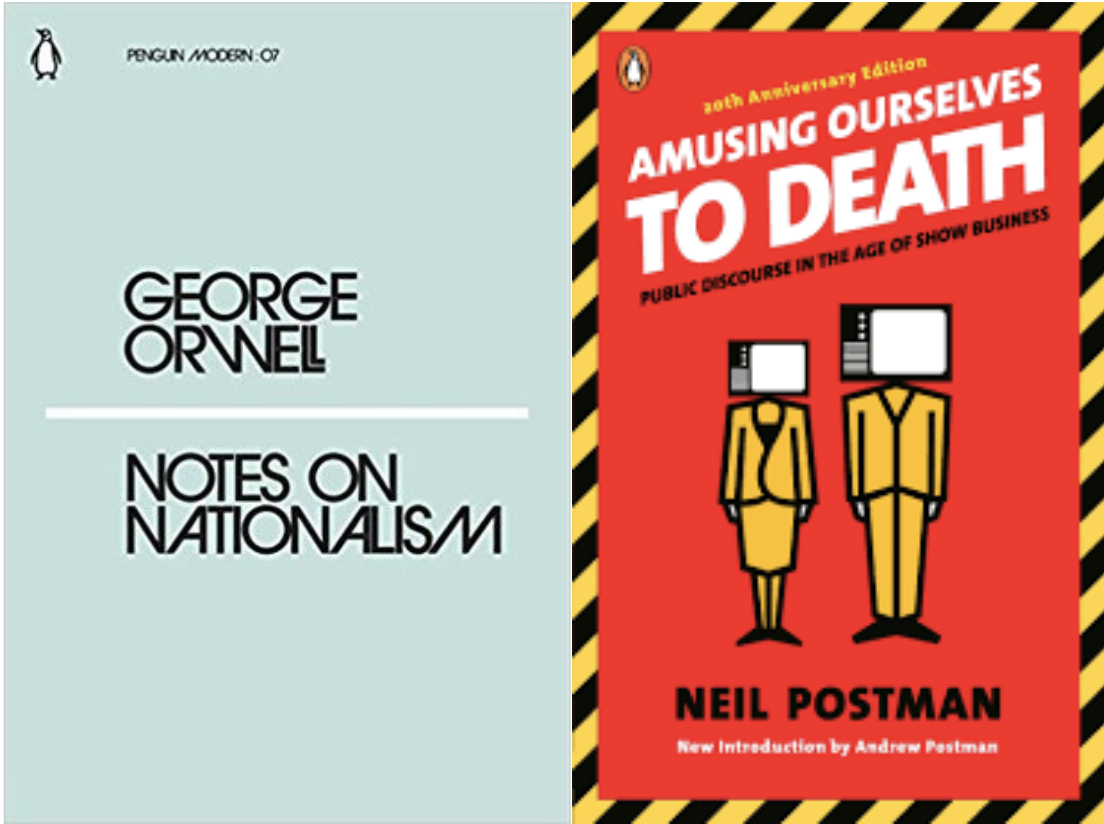 Orwell, Orwell, Orwell, this year. Got this for like $3 when getting some books for my girlfriend’s birthday. Interesting enough to warrant the 50 pages of reading and the money, though not as memorable or useful as his other stuff I read this year.

Amusing Ourselves to Death - Neil Postman

A fitting book to end the year on given my moving away from TV and internet media and back to books, as it makes a forceful critique of Television (TV) as a medium for public communication and personal learning. Before I got to it I was already right on-board with its arguments, but read it anyway because I’d liked Technopoly so much in the previous year.

Would really recommend this book, as its “The Medium is the Metaphor/Medium” stuff is really strong. I’d agree with others that have said Postman would be shocked at how bad things have gotten, and with the increasing dominance of image and video traffic on the internet we unfortunately seem to thrown away an opportunity to let the internet bring a revival of typographic culture to our societies. Fucking sucks, but guess we’ll just have to invent something better than TV and displace the ‘Idiot Box’.